With its almost 20 years of history, Jena's Cellu l'art short film festival has long been considered an adult. However, there is no loss of interest for the life of adolescents and especially for the cinematic implementation - on the contrary. With "teen shorts" Nadine Katschmarek, long-time festival manager of the association, has established a media educational format that is dedicated to this most beautiful and terrible time of life. 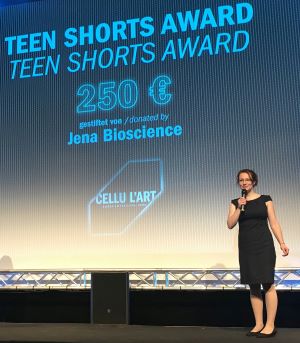 In the leading roles: the young people themselves. As protagonists in the films, as spectators at the well-attended screenings in the Schillerhof, but also as curators who put together the short film programme on their own responsibility.
This requires supporters without fear of critical, authentic content - and with stamina, as Nadine Katschmarek knows. "At cellu l'art everything revolves around the short episodes, but in sponsoring we need film-savvy, reliable partners like Jena Bioscience to accompany us on the long haul."
Since the first edition, we have supported the format, for example by donating the Teen Shorts Award and presenting it directly to the filmmaker for the award ceremony. Because we believe that the exchange with filmmakers from all over the world inspires young people to take the camera themselves. This way viewers may become producers - or at least critical consumers.