Of Charity and Far-Sightedness - The Kindersprachbrücke Jena

Everyone is talking about a globalized world. But in recent years, there is a general sense that our horizons tend to become narrower and more local - rather than wider and more universal. There is a tendency to shut oneself off from what is foreign and different. This makes it all the more important to support initiatives that promote understanding between people of different cultures and give voice to those who are too often overheard. 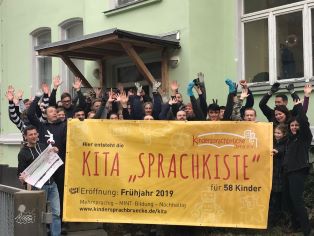 The activities of the Kindersprachbrücke Jena range from language lessons to sponsorships for teenage refugee housing groups to a wide variety of cultural and educational work. To our company, supporting these projects is more than just sponsoring among many. Or as the managing director Wolfgang Volkmer puts it: »At Jena Bioscience, we feel a genuine interest in our work, which goes far beyond financial support. I regularly see employees attending our events or getting involved in concrete actions. A good, lively partnership has emerged.“ Speaking of actions: The association is currently renovating an old house in which a kindergarten with a MINT focus is to be set up. Jena Bioscience also provides support in this area. After all, far-sightedness and charity are not opposites - they are two sides of the same coin.